Perth and the Parthenon Frieze

As construction work on the new WA Museum in Francis Street nears completion, it is worth noting the connection the original WA Museum and Art Gallery had with the Parthenon Marbles. It may surprise readers to know that a replica of part of the frieze was in the old museum.
The addition of an art gallery, costing approximately £10,000, in 1908 to the original James Street Museum had as its centre piece, in what was called the Hellenic Gallery, facsimiles of the Parthenon frieze. Known as the Beaufort Street Building, the edifice served as the Art Gallery of Western Australia from 1908 to 1979. The entrance from Beaufort Street would take visitors from the statue gallery on the ground floor up an impressive staircase to the Hellenic Gallery where paintings were displayed. High above the paintings, along the length and breadth of the gallery, was one of the world’s best quality casts of the Parthenon Marbles. (There were also other reproductions in the Museum of antique bronzes and “valuable specimens of Graeco-Roman pottery”.)
This space later became the Katta Djinoong Gallery, depicting the history and culture of the Indigenous peoples of Western Australia, with the classical Greek relief still running around the top of the walls.
The plaster replica was approximately 90 metres long, occupying the top of the four walls of the Gallery. The cast was a full-sized copy of nearly 60% of the Ionic Frieze from the Parthenon in Athens. The Ionic Frieze is one of three of the major elements of the art of the Parthenon (see picture below). The original Ionic Frieze was highly decorated and coloured.
The Perth cast was acquired by the Western Australian Museum in the first few years of the 1900s and was installed in the new gallery by June 1908. It was the show piece of the new building, as can be evidenced from newspaper reports at the time, including one from The West Australian, 24 June 1908, on the opening of the new extension to the Museum in which the replica held pride of place:
“... A special feature of the Picture Gallery is a frieze of casts of about 300ft, of the famous frieze of the Parthenon …”
The Perth cast of the Parthenon Frieze is not the only cast of the Marbles. Along with the original sculpture that Lord Elgin arranged to be sent to London were moulds of much of the Frieze.
It was from the Italian firm Brucciani & Co that the Committee of the Western Australian Museum and Art Gallery acquired the cast of the Parthenon Frieze.
There are at least two other such casts in Australia; one at the University of Melbourne and the other at the Women’s College, University of Sydney.
According to Kevin O’Toole, the Perth frieze is important for a few reasons:
1. The cast is itself a work of art.
2. Given that the original marbles have deteriorated to a degree, then the Perth frieze captures a moment in time recording detail of the original that may now be lost. The
Perth cast may be an important record of the condition of the original art well over a century ago.
3. The cast provided (and hopefully will do so again) an opportunity for visitors to the Perth Art Gallery and Museum to examine a physical facsimile of the original art; art of major international significance.
It is hoped that the Parthenon Frieze will be suitably displayed in the new WA Museum. 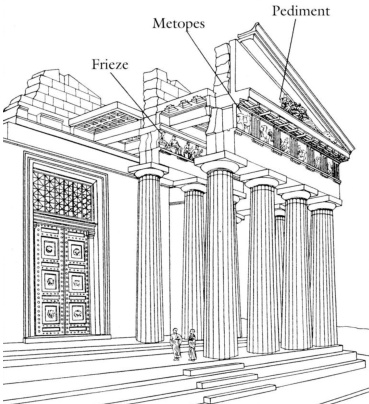 References:
“At the Museum”, The West Australian, 9 February 1907. p. 3
“The New Art Gallery”, The West Australian, 24 June 1908, p. 5.
“The New Art Gallery”, The Western Mail, 27 June 1908, p 14
Kevin O’Toole, “The Hellenic Gallery at the Museum of Perth—Is it a Story of Contested, or of Complementary, Heritage?” In RAGWA, Vol 2, Issue 4, June 2007, pp. 1-3.
Heritage Buildings of the Western Australian Museum, http://museum.wa.gov.au/explore/education/perth/heritage-buildings-western-australian-museum-perth-self-guided