Ten heroes of the Greek Revolution

Agia Lavra (“Holy Lavra”) is a monastery near Kalavryta, Achaea, Greece, built in 961 AD, on Chelmos Mountain, at an altitude of 961 metres. It can be described as the symbolic birthplace of modern Greece. 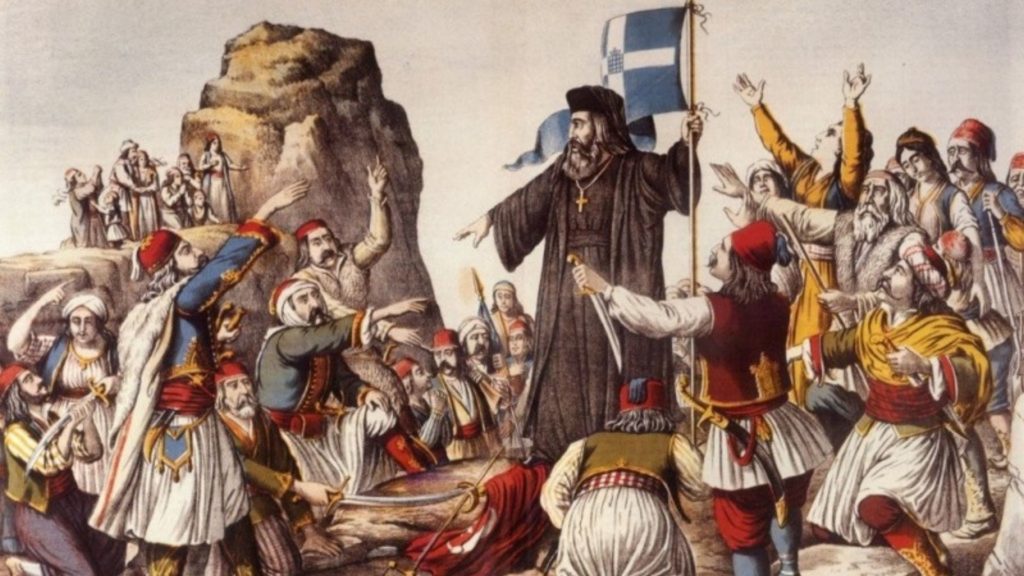 He is a spokesperson for the Panepirotic Federation of Australia, he has consistently raised awareness of the plight of the Northern Epirot Greek minority in Southern Albania, traveling to Albania on many occasions to research the plight of the Northern Epirots. As a journalist, Dean Kalimniou is popular within the Greek community of Australia through his column in the Melbourne Greek newspaper Neos Kosmos (New World),[1] entitled Diatribe, which has been running since 2001, and as a regular columnist in OPA! magazine. He is also a well-known poet and short story writer within the Greek community. He is widely noted as one of the few Australian born Greek poets who produce literature in the Greek language. He has published seven poetry collections.

The general and leader of the Greek War of Independence has gone down in history for his great success in the defeat of the Ottoman army under Mahmud Dramali Pasha at the Battle of Dervenakia in 1822. Appointed commander-in-chief of the Greek forces in the Peloponnese in 1825, Kolokotronis is considered to be one of the most significant figures of the Greek War of Independence. Following the war, he became a supporter of Count Ioannis Kapodistrias and a proponent of alliance with Russia. After the assassination of Kapodistrias in 1831, Kolokotronis created his own administration in support of Prince Otto of Bavaria in king of Greece but later opposed the Bavarian-dominated regency. In 1834, he was charged with treason and was sentenced to death, however pardoned. He died in 1843 in Athens, a day after his son’s wedding.

Born in a prison cell in Constantinople, she was the daughter of Stavrianos Pinotsis, a captain from Hydra. She married twice, but took on the surname of her second husband, Captain Dimitrios Bouboulis, a wealthy shipowner. She allegedly joined the Filiki Etairia, an undergound organisation which worked towards the Revolution. She gave all she had, buying arms and ammunitions at her own expense, which she said she did “for the sake of my nation”. Her daughter, Eleni Boubouli, later married the son of Kolokotronis, Panos Kolokotronis.

A famous brigand, military commander and hero of the revolution. Born in a monastery near the village of Mavrommati in the Agrafa mountains, he joined the service of Katsantonis, a local brigand at a young age. He was cunning, brave and reckless, rising quickly through the ranks to become lieutenant. He was killed on 23 April, 1827, after he became fatally wounded by a rifle bullet in battle.

A Greek merchant military officer, however he is mainly known these days for his memoirs which are believed to be a ‘monument of Modern Greek literature. Born Ioannis Triantaphyllou, he joined the struggle for independence, climbed up the ranks and noted numerous victories. After Greece’s Independence he had a tumultuous public career and played an important role in drafting the first Constitution to the Kingdom of Greece. Like Kolokotronis, he was sentenced to death but later pardoned. His name ‘Makriyiannis’ (Long John) is a nicknamed given to him on account of his height.

A great military commander, Diakos was born Athanasios Nikolaos Massavetas. The grandson of a local brigand, he was drawn to religion from an early age and was sent to the Monastery of St John the Baptist for his education. He became a monk at the age of 17 years and was ordained a deacon of the Greek Orthodox church not long after.

Rigas Feraios was a Greek writer, political thinker and revolutionary. He is remembered as a Greek national hero, a victim of the Balkan uprising against the Ottoman Empire and a pioneer of the Greek War of Independence. He wrote the Thourios (1797) or battle-hymn which every Greek at the time could relate to in which he wrote, “It’s finer to live one hour as a free man than forty years as a slave and prisoner.”

George Dimitris Flessas was a patriotic Greek, priest and government official. He was ordained an Archimandrite in 1818, and named Minister of Internal Affairs and chief of Police by the government of Prince Alexander Mavrocordato under the name Gregorios Dikaios, his alias when serving with the Filiki Eteria. He is remembered for instituting many reforms, establishing the Greek postal system and building many schools. He was killed during the Battle of Maniaki on 20 May, 1825, fighting against the forces of Ibrahim Pasha.

A wealthy woman, she spent all her fortune for the freedom of Greeks. She also managed to raise funds by getting her European friends to contribute money and guns to the Revolution. Born in Trieste, which was part of Austria, but is now located in Italy, she grew up in an educated family and studied Greek philosophy, while also speaking fluent French, Italian and Turkish. In 1809, she moved with her family to Paros and learnt that plans were underway for a Revolution. She later moved to Mykonos, her island of origin, and influenced many of the leaders of the region to join the Revolution.

Kanaris grew to prominence during the Greek War of Independence (1821-1829), and was known in particular for his role in destroying the flagship of Turkish admiral Nasuhzade Ali pasha in revenge for the Chios massacre on the night of 6 June, 1822. There were 2,000 Ottoman casualties, including the pasha himself. Kanaris later became Greek prime minister and was one of the few people to gain the trust of Ioannis Kapodistris, the first Head of State of independent Greece.

Andreas Vokos, nicknamed Miaoulis, was an admiral and politician who commanded Greek naval forces during the Greek Revolution. He gained wealth through trade, and contributed to the cause of resistance against the Turks in every possible way, spending money from his wheat-shipping business during the Napoleonic Wars. He lead Greeks to victory in skirmishes off Modon, Cape Matapan, Suda and Cape Papas from May 1825 to January 1826.